Minsk – Getting to Know the ‘Hero City’

By any known measure, Minsk paints a vivid tableau of itself as a major European capital city. Vibrant and buzzing with activity, a visitor can nevertheless feel instantly relaxed and at ease upon arrival without even knowing it. 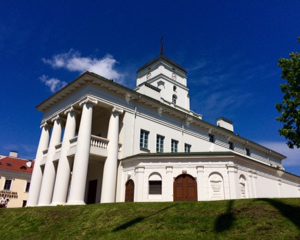 By any known measure, Minsk paints a vivid tableau of itself as a major European capital city. Vibrant and buzzing with activity, a visitor can nevertheless feel instantly relaxed and at ease upon arrival without even knowing it.

Almost two million people live here. Business and commerce are thriving. Opportunities to experience culture, the arts, entertainment and sport for young and old, visitors and residents alike are everywhere to be found. And at the same time, the atmosphere and ambience suggest a universal feeling of tranquillity.

Visitors need fear no risk of claustrophobia from overcrowded and overbearing buildings closing in on top of each other. Instead, the vista from horizon to horizon presents huge skies, with a real sense of open space. Why is this so?

For the answer, look no further than the events of the ‘Great Patriotic War’, when Nazi hordes swept across the country, laying waste to everything and everyone in their path. When the Red Army liberated the city on 3 July 1944, virtually no building was left standing. Every element of the social and transport infrastructure had been eradicated. The pre-war population of 300,000 had been decimated. Only 50,000 shell-shocked and battle-weary residents remained, living hand-to-mouth in the bombed-out ruins.

The initial plan to abandon the city and move the capital east to Mahiliou was soon dismissed and instead, in 1945 a major programme of rebuilding and renovation on an unprecedented scale began.

The result is today’s Minsk, the best example of post-war Soviet Union urban planning on a grand scale and one of the most impressive cities in all of the republics of the former USSR.

Many first-time visitors from the West realise soon after arrival that it’s unlike any capital city they have ever visited before. And it’s less than three hours away from London by air.

Getting to Know Minsk

Information about what to do and see is now increasingly easy to find, particularly online. But a new visitor’s search for the heart of a place is best begun with a process of orientation. And by far the best way to do this is to walk the streets. Because only by physically connecting with one’s surroundings is it possible to feel the buzz and the vibe; the sights, the smells, the sounds, the people, the weather and the seasons. An added advantage is that no money changes hands in the process. It’s all free!

My personal recommendation for a walking tour follows more or less a straight line bisecting the city in a north-easterly direction. It begins in Privakhsalnaya Square in front of the impressive railway station and follows Nyezalyezhnastsi Avenue all the way to Victory Square, taking in Independence and Oktyabrskaya Squares along the way.

Each square has its own distinct characteristics, but my personal favourite is Independence Square. The sense of space and air here is breathtaking. Many pre-war Stalinist buildings survive, and the old master Lenin remains master of all he surveys from his plinth in front of the House of Government, a building of glorious yet simplistic symmetry.

The iconic and very red Catholic Church of St Simeon and St Helena can also be found here. Look also for the Central Post Office, with its imposing clock.

Nyezalyezhnastsi Avenue is the city’s main thoroughfare and the axis around which the great works of reconstruction were designed after the war. Walk north-east from the station along one side of the Avenue to Independence Square, then re-trace your steps back to the station along the other side. Avoiding street furniture and fellow pedestrians, and without stepping into the traffic (!) be sure to gaze up and around the whole time.

There is so much for you to see. Look particularly for the KGB Building and the GUM store. For the best souvenirs in town, shop at Central Bookstore (Tsentralnaya Knigariya) at 19 Nyezalyezhnastsi Avenue, where you can find a wonderful selection of glossy pictorial guides, maps, postcards, posters and calendars, all at very reasonable prices.

If the weather is dry, indulge in one of my very favourite pastimes in Minsk – promenading and people-watching. Try Gorky Park, Alexandrovsky Public Garden, Yanka Kupala Park, Central Botanical Gardens, Chelyuskintsev Culture and Leisure Park and my own personal choice, Pobyedy Park, where you will also find the impressive and newly relocated State Museum of the Great Patriotic War.

If you’re out walking for hours on end, you’re going to need sustenance and regular rest to recharge your batteries. These are my recommendations.

For breakfast or just coffee and cake, try Maya Angliskaya Babushka at 36 Karla Marksa Street. ‘My English Granny’ will of course appeal to many UK visitors! For lunch and while promenading in Gorky Park, visit Family Club restaurant, where the pizza is particularly good.

For dinner, Kuchmistr at 40 Karla Marksa Street is a good option for traditional Belarusian food. And for beer and a good night out, many of my Minsk friends speak very highly of Gambrinus, centrally located at 2 Svobody Square. The food is also good here.

For a slightly off the wall halt amongst the bustle, a visit to the attractive historic Troitskoye (Trinity) suburb down by the Svislach River might include a rest-stop at the Barzha floating restaurant. It tends to be overlooked and is never busy, but the food and service here are consistently good.

These recommendations are all personal ones based on my own experiences. You may perhaps discover better options for yourselves. Right there is the beauty of travel. Go to Minsk with an open mind. You may be surprised by what you find.

Nigel is a freelance travel writer specialising in Belarus and is based in the UK. 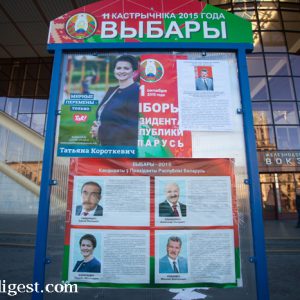 The 2015 presidential election in Belarus revealed three important controversies for the authorities, the opposition and the West.

First, the Belarusian authorities want to look more democratic to the West without allowing any real changes inside the country.

Second, the opposition has the difficulty of wanting to play a role in the political process in Belarus but at the same time without legitimising the fraudulent election process.

Third, the desire of the West to engage more with Belarus clashes with its commitment to the principles of human rights and democracy.

As with most controversies, the best practical outcome is a compromise, which usually leaves none of the parties completely satisfied.

The Belarusian authorities allowed the opposition to conduct a relatively free campaign and refrained from brutal repression similar to the 2010 post-election crackdown. However, they persisted in abusing the early voting process and largely prevented observers from watching the vote count, as the preliminary report of a mission of the Organisation for Security and Cooperation in Europe suggests.

Western observers appreciated the peaceful nature of the election campaign but concluded that the election process was far from being fair and democratic. Nonetheless, the European Union is all set to suspend sanctions against most of the individuals and companies, which will be a reward for the "peacefulness" of the Belarusian authorities and the release of all political prisoners in September.

These developments have opened the door for a more meaningful cooperation between the West and Belarus not only on political, but also on economic issues. The Belarusian authorities particularly need economic help because of the deteriorating Russian economy, which is the main supporter of the Belarusian regime. The West will have another chance to test whether the policy of engagement yields more results than the policy of sanctions.

The Belarusian opposition reached the election deeply divided between those who wanted to engage with the system in order to use all opportunities which the election period provides and those who wanted to boycott the election. The engagement camp managed to assemble many protest votes behind a new personality, presidential candidate Tatsiana Karatkevich. However, she is unlikely to become a uniting figure for the opposition.

Ironically, this time the non-democratic election may bring Belarus closer to the West because of the removal of sanctions. However, any optimism about Belarus turning West is misplaced. The Belarusian president will be careful not to cross the red lines drawn by Russia. Although Lukashenka feels uncomfortable in the shadow of Russia, he understands that this is the only game in town if he wants to stay in power.

Time will show how long Belarus will remain a country without political prisoners and free from sanctions. It is also too early to say whether we will see a repeat of the vicious sanctions-engagement circle or the West will manage to develop and implement a long-term strategy towards Belarus.