6 March 2018
On 16 February 2018 Belstat, the official statistical body of Belarus, announced that GDP growth for the first month of the year had reached a new high, surpassing the previous month’s record. Meanwhile, the Heritage Foundation’s statement on 5 February...

On 16 February 2018 Belstat, the official statistical body of Belarus, announced that GDP growth for the first month of the year had reached a new high, surpassing the previous month’s record.

Meanwhile, the Heritage Foundation’s statement on 5 February that the country’s economic freedoms have declined dampened the mood in the business community.

Finally, on 1 March, President of Belarus Alexander Lukashenka acknowledged the existence of problematic issues related to the supply of Belarusian milk to the Russian market.

According to Belstat, in January 2018 GDP growth reached 4.6 per cent year-on-year (see Figure 1). Export, investment in fixed capital and industrial production provide the foundation of this positive economic tendency. 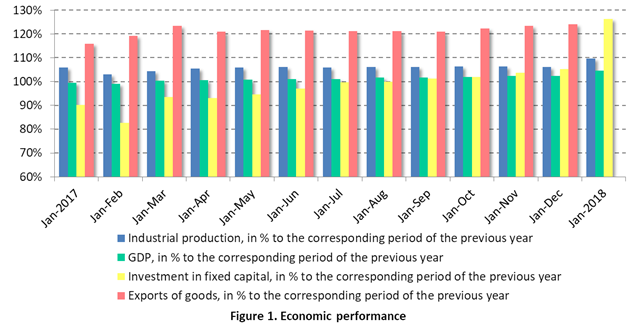 In January 2018, the growth of import of goods slowed down in sharp contrast with the strengthening growth of the export of goods. This pattern of imports mostly resulted from decreasing consumer demand which, for instance, led to declining food imports.

Industrial production recovers gradually, growing by 9.7 per cent in the first month. The effect of “delayed” external demand plays a crucial role here, while the associated growth in imports of intermediate goods largely bypasses the role of domestic demand.

During the preceding four years, depressed investment in the Belarusian economy showed itself most drastically in respect of fixed capital. As a result, the share of investments in GDP has fallen from its peak of about 40 per cent in 2010 to about 25 per cent today.

Meanwhile, according to data announced by Belstat on 26 February, fixed investments have increased by 26 per cent year-on-year (see Figure 1).

The lower level of investments in previous years has raised their quality because economic entities reject less effective projects. The growing return on capital for new investment projects in Belarus therefore probably indicates that the period of depressed investment has ended.

Belarus currently supplies milk to 45 countries, but Russia remains its main market. However, on 9 February Rosselkhoznadzor (the Russian State Service for Veterinary and Phytosanitary Supervision) imposed restrictions on the import of Belarusian dairy products, strengthened laboratory controls and suspended the certification of products from a number of Belarusian plants due to violations of Eurasian Economic Union norms.

In 2017 Rosselkhoznadzor repeatedly limited the supply of agricultural products from Belarusian enterprises to the Russian market. For example, according to the Ministry of Agriculture and Food of Belarus, in December last year 54 Belarusian companies fell under Rosselkhoznadzor’s sanctions.

The Belarusian authorities blame the Russian side for unfair claims. According to official estimates, in 2017 Belarus lost hundreds of millions of dollars in the Russian food market due to sanctions imposed by Rosselkhoznadzor.

Last year the enterprises of the Ministry of Agriculture of Belarus increased exports of products by 3.9 per cent, yet the share of exports to Russia decreased. According to Belstat, in 2017 Belarus delivered to Russia condensed and dried milk and cream for $371.4m – 12.8 per cent less than in 2016.

According to experts, Russia constantly finds “harmful and dangerous substances” in Belarusian milk not because of its low quality, but due to increased production of dairy products by Russia’s own producers.

The Director of the Centre for the Study of the Dairy Market of Russia, Mikhail Mishchenko, admits the lower price of Belarusian products compared to Russian. However, Russia also blames Belarus for significant volumes of re-export that pass through the country and form a significant surplus of dairy products on the Russian market.

All this leads to lower prices in the consumer market of Russia, decreasing revenues of its domestic producers and results in increasing trade tensions between the economic allies.

According to the latest data from the Heritage Foundation, Belarus position in the Index of Economic Freedom worsened (see Figure 2). 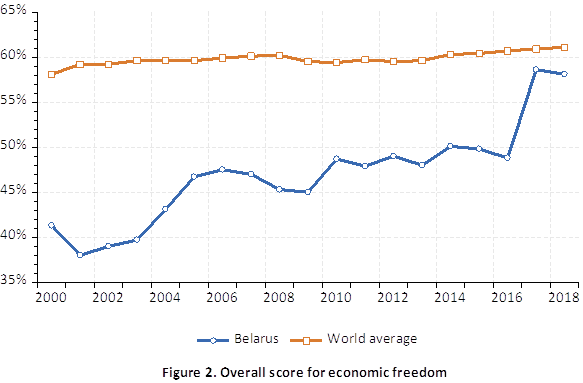 Belarus moved from 104th to 108th place in the ranking prepared by the American research organization. The authors of the study note that, due to the stagnating economy, liberal approaches lost priority in the economic policy of the Belarusian authorities.

Moreover, according to the authors of the study, the violation of private owners’ rights continues (for example, through expropriation of private property through de-privatization), as does the spread of state participation and control of the economy. The state share reaches approximately 70 per cent.

These factors seriously impede economic growth, social development and lead to widespread corruption in the country. According to official statistics, the number of corruption crimes in Belarus has grown – 1,922 cases of bribery in 2017; almost twice as high as in 2016.

According to the survey conducted by the IPM Research Centre in 2017, a third of respondents (representatives of small and medium-sized enterprises) admit that corruption remains a widespread phenomenon in Belarus. The Chairman of the supervisory board of the IPM Research Centre, Igor Pelipas, explains that corruption increases business costs and this, as a rule, leads to an increase in the cost of products sold and services rendered.

Taken altogether, the revival of exports and end of the investment depression have given a positive impetus to the entire economy. However, Belarus still substantially lacks economic freedoms and export disagreements with Russia over food products remain unresolved.

On 24 January 2018, government officials announced new plans for support to Belarusian entrepreneurs in the current year. Meanwhile, according to Belstat, the state industrial sector remains the main driver of economic growth accompanied by a strong recovery of exports. However, the absence of an acceptable strategy for solving state-owned enterprises’ debt problems continues to threaten financial stability and long-term economic growth.

In the second half of 2017, the authorities adopted a package of documents aimed at facilitating private business development. Legislative innovations greatly simplified the conduct of business, while radically reducing regulatory and administrative barriers. In addition, the government introduced additional tax and regulatory liberalisation for certain entrepreneurial activities; primarily small companies and individual entrepreneurs. Finally, the authorities expanded the possibilities for self-employed individuals (without registration of small businesses), for example, in the fields of craft activities and agritourism.

Next, on 24 January 2018, government officials announced plans to support entrepreneurship in the current year, including increased lending, lowered loan rates and several changes to taxation. In particular, the head of the National Bank of Belarus’s department for monetary policy and economic analysis, Dmitry Murin, says that lending will grow by 9-12 per cent, which supposedly will not harm macroeconomic stability.

Moreover, the National Bank expects a small drop in lending rates by approximately 1 percentage point. According to Murin, inflation expectations deter a more radical decrease in rates. Namely, the results of the analytical survey of individuals show that they subjectively feel inflation at 13 per cent, while prices in 2017 increased by two times less.

Finally, according to the deputy minister for taxes and duties, Ella Selitsky, the government will prepare proposals for comprehensive reforms of tax legislation throughout the year. It is likely that the fiscal system will undergo significant changes in 2019, with stabilising tax legislation the main goal for the next three years.

These measures will support private sector development. However, the key barrier to entrepreneurship remains unequal conditions for economic activity in comparison with state-owned enterprises (SOEs) rather than the regulatory environment.

In this respect, the artificial “bias” in allocating resources in favour of the state sector remains especially important. Without its elimination, the private sector will be stuck in the doldrums and unable to fully realize its potential.

While measures to develop the private sector have only limited effects, the state industrial sector remains the main driver of economic growth. In 2017, it showed growth of 6.1 per cent year-on-year.

According to honorary chairman of the board of the Business Union of Entrepreneurs and Employers, Georgiy Badey, this growth mostly occurred due to the favourable macroeconomic environment in key trade markets. However, the real sector lacks new drivers of growth and encouraging changes in economic policy.

In particular, financial instability associated with low quality SOE debts remains a serious threat to the economy. Moreover, Belarusian SOE debts continue to rise. For the first nine months of the previous year, the payments on loans and borrowings exceeded the volume of gross value added in the industrial sector as a whole. Therefore, in the past year, they not only failed to cover their old debts but became further indebted. As a result, the total national debt currently hovers in the range of 45-50% of GDP.

Measures recommended by the IMF to kickstart the process of resolving debt problems include strengthening creditors’ rights, permitting bankruptcy procedures for large debtors, and the sale of SOE debts at a fair market value (compared to their nominal value).

At the same time, this tough solution may seriously disturb the real sector (the sector of the economy that actually produces goods and services) and has both social and political implications. The “soft” alternative assumes new subsidies from the state.

However, such an “easy” solution only freezes the problem and limits its negative impact on the current macro dynamics. In the future, the debt problem may reveal itself at any moment and cause a new wave of economic recession.

Stable global growth contributes to revived demand for Belarusian commodities and industrial goods exports to Russia. This recovery in exports gave a positive impulse to the Belarusian economy, although growth remains fragile. For example, in the second half of 2017, the physical volume of shipments of “growth leaders” in the first half of the year (oil products, potash fertilizers, tractors and trucks) dropped. In contrast, the delivery of goods that previously lagged behind (food products, tires, refrigerators and shoes) increased.

Instability in export growth therefore remains a challenge for the whole economy, since the prospects for output growth highly depend on export performance.

Overall, foreign trade turnover of goods during the eleven months of the previous year reached $54.1bn and increased by 23.5 per cent year-on-year (see graph below). In November, imports of goods exceeded exports by $600m increasing the negative balance in merchandise trade to $4bn year-on-year, which surpassed 2016 figures by more than $800m. 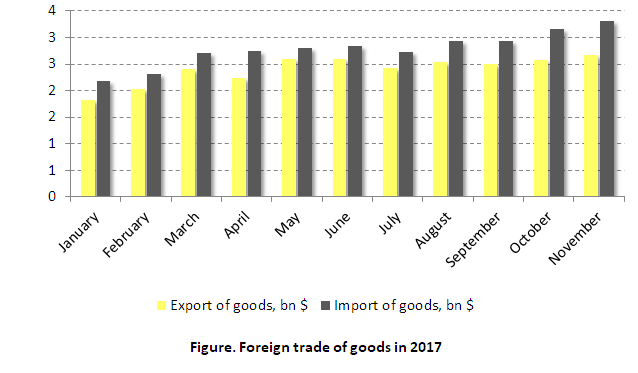 As a result, the traditional imbalances in the Belarusian economy return: the growth of export goods invariably leads to the import growth and a deterioration in the balance of payments. Thus, while the results of measures for the development of the private sector remain invisible, positive dynamics of the economy will sustain only in case of a new round of export growth. Furthermore, the absence of an adequate strategy for solving the debt problem of SOEs continues to threaten financial stability.